Snake Model: The Differential Theory of US Armed Forces

Snake Model: The Differential Theory of US Armed Forces (Snake Model) upon encountering a snake in the Area of Operations (AO).

2. Airborne: Lands on and kills the snake.

3. Armor: Runs over snake, laughs, and looks for more snakes.

4. Aviation: Has Global Positioning Satellite coordinates to snake. Can’t find snake. Returns to base for refuel, crew rest and manicure.

5. Ranger: Plays with snake, then eats it.

7. Special Forces: Makes contact with snake, ignores all State Department directives and Theater Commander Rules of Engagement by building rapport with snake and winning its heart and mind. Trains it to kill other snakes. Files enormous travel settlement upon return.

10. Navy: Fires off 50 cruise missiles from various types of ships, kills snake and makes presentation to Senate Appropriations Committee on how Naval forces are the most cost-effective means of anti-snake force projection.

11. Marine: Kills snake by accident while looking for souvenirs. Local civilians demand removal of all US forces from Area of Operations.

15. Quartermaster: (NOTICE: Your anti-snake equipment is on backorder.)

18. F-16 pilot: Finds snake, drops two CBU-87 cluster bombs, and misses snake target, but get direct hit on Embassy 100 KM East of snake due to weather (Too Hot also Too Cold, Was Clear but too overcast, Too dry with Rain, Unlimited ceiling with low cloud cover etc.) Claims that purchasing multi-million dollar, high-tech snake-killing device will enable it in the future to kill all snakes and achieve a revolution in military affairs.

21. B-52 pilot: Pulls ARCLIGHT mission on snake, kills snake and every other living thing within two miles of target.

22. MinuteMan Missile crew: Lays in target coordinates to snake in 20seconds, but can’t receive authorization from National Command Authority to use nuclear weapons.

25. Signal: Tries to communicate with snake…fail repeated attempts. Complains that the snake did not have the correct fill or did not know how to work equipment a child could operate. Signal Officer informs the commander that he could easily communicate with the snake using just his voice. Commander insists that he NEEDS to video-conference with the snake, with real-time streaming positional and logistical data on the snake displayed on video screens to either side. Gives Signal Corps $5 Billion to make this happen. SigO abuses the 2 smart people in the corps to make it happen, while everybody else stands around, bitches, and takes credit. In the end, General Dynamics and several sub-contractors make a few billion dollars, the 2 smart people get out and go to work for them, and the commander gets what he asked for only in fiber-optic based simulations. The snake is forgotten. 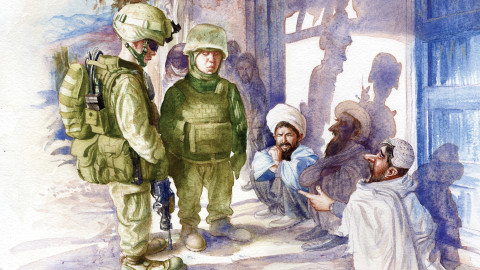